Stick in the MUD Turns 10

Stick in the MUD celebrated its tenth anniversary on February 21st, 2004. To celebrate the anniversary year, Paruda has designed two commemorative items that the good folks at CafePress, with all their high-tech imaging wizardry and a little financial incentive, can churn out on demand and send to you the distinguishing mudder.

And this is what the mug looks like, perched atop one of Paruda's PowerBooks: 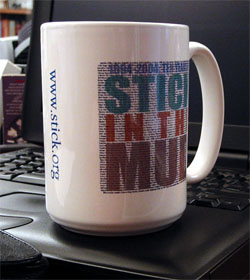 The mug has two designs. On one side is an updated rendering of the Stick in the MUD logo, noting the 10th anniversary. Woohoo! On the other is a potentially eye-damaging block of teeny tiny itty bitty just-barely-legible text containing the names of 1147 of the most successful (or at least highly addicted) players ever to grace the scrolling text of Stick in the MUD. From today's immortals to players who wore out their welcome before the mud's first birthday and were strung up by their sub-issue leggings... they're here. Overlaying this big pile of names, in big colourful letters, are the words 1994-2004: TEN YEARS OF STICK IN THE MUD. See if your name is on the mug.

The bear is a cute little critter in a white t-shirt with the updated logo. 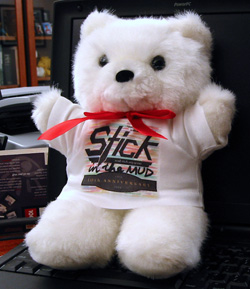 So, now that you're positively giddy at the prospect of forking over some of your hard-earned dough for one of these precious artifacts, we're getting close to the link of interest.

Before you go, a few notes:

And so, without further ado, the link: